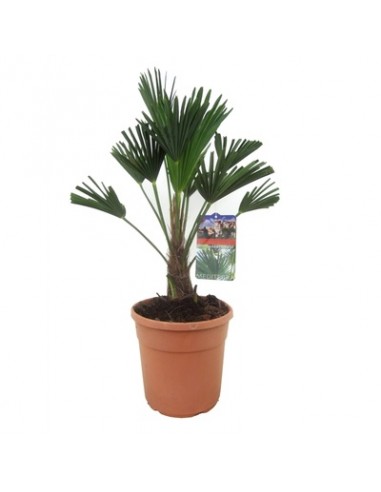 Generality of the Trachycarpus fortunei plant:

Trachycarpus fortunei also called Fortune palm, Chinese or China palm and also Chusan palm, is a plant belonging to the Arecaceae family (subfamily Coryphoideae), native to Asia and frequently cultivated in Italy as an ornamental plant

Sale of the Trachycarpus fortunei plant, available in the following formats:

Generality of the Trachycarpus fortunei plant:

These are fan-shaped palms with leaves with a thornless petiole ending in a rounded fan of numerous leaflets. The base of the leaves produces persistent fibers which often gives the trunk a characteristic hairy appearance. All species are dioecious, with male and female flowers borne on different plants, although the female plant can sometimes produce male flowers, thus allowing for occasional self-pollination. This genus is very popular with palm enthusiasts for its ability to withstand the cold and adaptability to climates with cool summers. Palms can tolerate snow and frost in their native environments and are the most rustic palms among those with a trunk.The most common species is Trachycarpus fortunei, which is the most cold-resistant palm, being able to tolerate even for short periods. temperatures below -20 ° C: it has been successfully cultivated in Scotland, western Norway and even on the Alaskan peninsula. It is widely grown in Great Britain and Ireland, along the Atlantic coast of France, in southern Switzerland and on the Pacific coast of North America. In Italy it is grown everywhere, even in the Po Valley. The trunk fibers produced by Trachycarpus leaf sheaths are harvested in China and elsewhere and are used to make very strong albeit coarse ropes, brooms and brushes. The sheaths are also used to line the trunks of artificial palm trees.

Cultivation and Care of the Trachycarpus fortunei plant:

It prefers fertile, well-drained soil, but it adapts. Protected from strong and cold winds. It is the only palm that survives the snow and frost. Semi-rustic, it is in fact widespread throughout the Po Valley.

MNDP1192
€43.00
Generality of the Zamioculcas zamiifolia plant: Zamioculcas zamiifolia is the only species belonging to the genus Zamioculcas of the Araceae family. It is a bulbous, succulent, evergreen plant native to tropical Africa. It is especially appreciated for the beauty of its fleshy, lanceolate, pinnate leaves, of a very glossy intense green color. jar 35cm,...
Tap to zoom
You need to login or create account